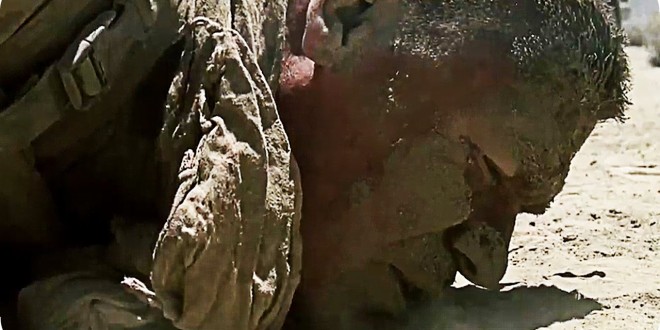 Disturbing, problematic but pragmatically real, dynamic scenario about war. Director Doug Liman, without sensationalism, paints a cerebral portrait of a wounded soldier, trapped by a sniper, behind a crumbling brick wall in post war Iraq, 2007.

“Sargent Isaac” (intensely riveting performance by Aaron Taylor-Johnson) and fellow combatant, “Sargent Matthews” (John Cena) after days of observing the aftermath of a killing zone, leave the protection of their desert lair, only to be shot by an unseen Iraqi marksman; Isaac, with a bullet in his leg, hiding behind the meagre, porous wall, radios for help, only to discover his channel connects him to “Juba” (the angel of death and the source of their torment); conversation unveils the intricacies, prejudices, secrets hibernating at the core of each man. Juba (hypnotic voice of Laith Nakli) schooled in all things Western, fluent in the world of Shakespeare and Poe is a master of manipulation; he understands Isaac’s thought process, taunts and perpetually plunders wounds, both physical and psychological; theirs is game of survival and Juba is always a move ahead.

A provocative, compelling, mind-tingling thriller, “The Wall” is a metaphor for boundaries between disparate cultures, and peoples intransigence in recognizing the validity of the “other”. Unsettling “The Wall’s” lesson is eerily disconcerting, discouraging, disheartening.