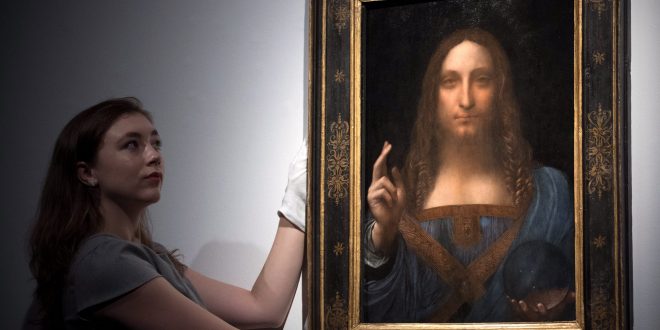 Remarkability pungently, powerfully informs these two documentaries about a man, a polymath, whose iconic genius defies categorization: analyzation of the human body, helicopter, parachute, armored tank, a pioneer in the field of robotics, but it is his visionary paintings that cement his lionization, still pulsating fervently at the center of today’s art world, more than five hundred years after his death; his vibrancy is electrifying. “Mystery of the Lost Portrait” (AMAZON PRIME) flows as an Agatha Christi, sleuth-hound investigation; images of the masterful man, nonexistent, only imagined; painstakingly, the powers of deductive reasoning, performed by experts reveal the validity of this “self-portrait”; his left-handedness, use of red chalk and binocular vision (both eyes working together on the same object); his inability to complete his works might be related to ADHD. Science is key to attributing this portrait to the elusive Leonardo; a fingerprint on the work, analyzed by police experts, confirms its legitimacy. At a murky moment near the end of his life, fearful of his legacy, he asked, “did I ever do a thing?” Unlike “Ozymandias” instead of despair, we look on his works and rejoice.

“THE LOST LEONARDO”  (IN THEARTES)

An extravagant, multi-faceted dissection of “Salvador Mundi”, a painting surfacing in New Orleans eventually finding a home in the arid terrain of Saudia Arabia; referred to as the “Male Mona Lisa”,  selling for 450 million dollars in 2017,  its’s provenance still in question, has generated more sensationalism than any artwork in history: the cast, consisting of restorers, curators, billionaires, critics; conspiracies, culprits add monumental greed and bibulous flavor to, what is still, an ambiguous, inscrutable conundrum. Edited by Nicolas Servide Staffolani, in tandem with director Andreas Koefoed, the saga moves, without hiccups, from a “sleeper” painting (purchased at auction by Alexander Parish for $1,175) restored by Dianne Modestine (by far, the most empathetic, and possibly the most disparaged cast member) and deemed an original Leonardo; from the multifarious to the singular progressing through the duplicitous shenanigans of art dealerships, auction houses, free ports, it is an exhilarating, thrilling tale, guaranteeing enthrallment long after the closing credits.